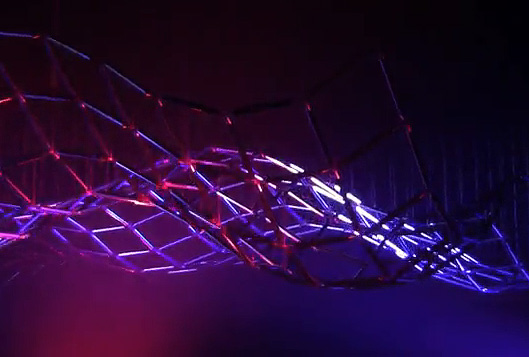 Reuben Heyday Margolin is an American-born artist and sculptor known for his mechanically-driven kinetic sculptures of wave-forms. Some of the sculptures are hand-cranked and small scale, while others are large, installed in large high-ceiling spaces, suspended from the ceiling.
He was educated in Berkley, then at Harvard University, where he earned a BA in English. He later studied drawing in Florence, Initially and Monumental painting at the St. Petersburg Academy of Arts, Russia.

Margolin has spent the last ten years making kinetic sculptures inspired by movements of water, wind, the contour of a flame. Seeking to combine the logic of mathematics with the sensuousness of nature, he has built a series of mechanical mobiles that captivates viewers with fluid movement. His work invites contemplation from a variety of perspectives: as a mesmerizing kinetic sculpture; as a visualization of the complexities of wave motion and related scientific and mathematical concepts; and as an intricate and beautiful mechanical device. Reuben’s work combines the logic of mathematics with inspiration drawn from the beauty and patterns of nature.

The Pentagonal Wave has 288 strings originating from a single rotating point in the upper structure. The distribution of the strings causes the silver cardboard tubes to undulate in the form of a five-pointed star. 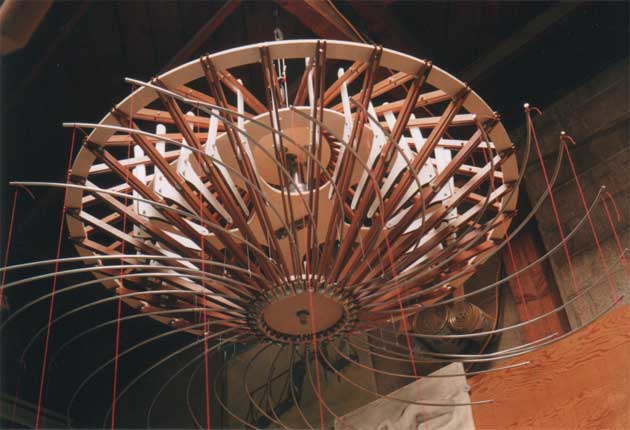 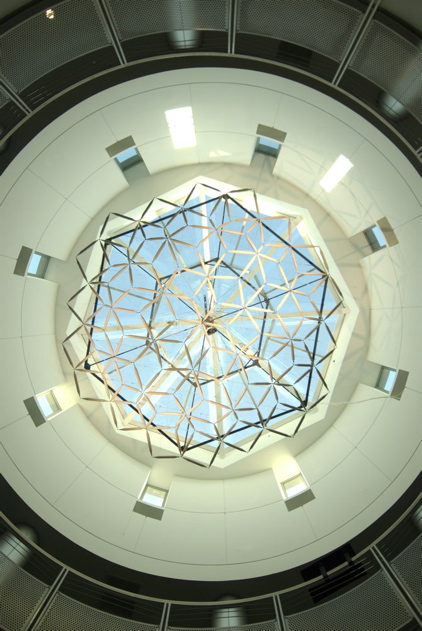 Hexagonal Wave was buit originally for a concert by the New Century Chamber Orchestra at the Yerba Buena Center for the Arts. Tapered white cardboard tubes in an hexagonal pattern ripple outward from the center in concentric circles. 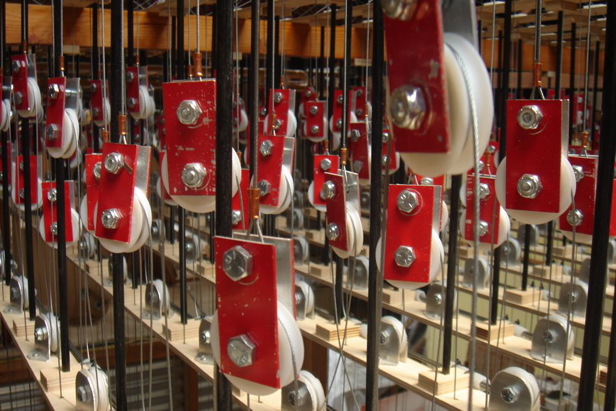 Inspired by the interference caused by two raindrops landing near each other in water, the Double Raindrop has 500 pulleys and a mile of cable.

The Yellow Wiggle adds a three-peaked sine wave to a four-peaked sine wave. Each of the 120 aluminum rods has a pulley on the bottom, which adds together the movements originating in the two large rotating circles. On the top of each aluminum rod is a yellow block of wood.

The Magic Wave is a version of the Square Wave, but with some major changes. Instead of a grid supported by 81 cables, The Magic Wave has a light blue aluminum grid suspended by 256 cables. And instead of two perpendicular waves, its motion is an addition of four variable-amplitude waves: two structured as single-wavelength, and two as double-wavelength. And there is an overall height mechanism that raises and lowers the entire wave simultaneously. 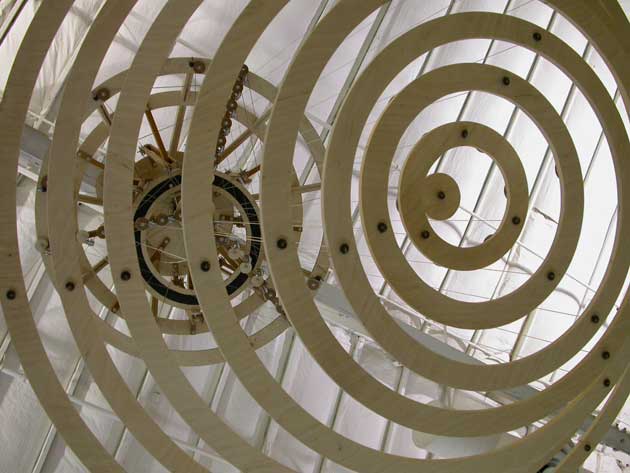