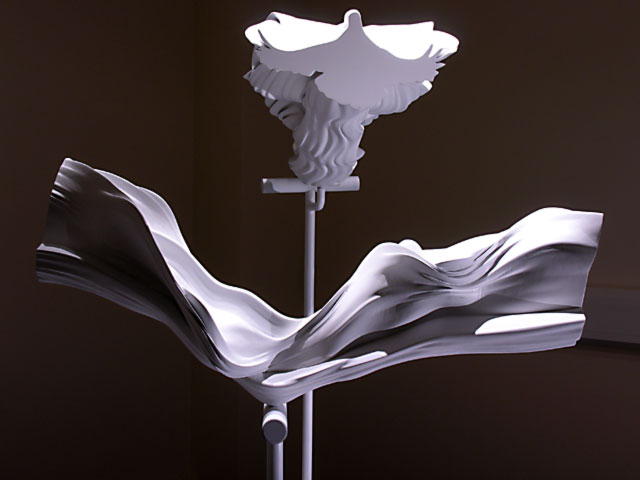 Geoffrey Mann is a Scottish artist and designer whose fascination with transposing the ephemeral nature of time and motion has created a studio practice that challenges the existing divides between art, craft and design. He has exhibited in National and International venues including MoMA New York; International Bombay Sapphire Awards, London and Milan, Jerwood Contemporary Makers exhibition, MAD New York and the European Glass Context in Denmark.

The Long Exposure series capture an essence of the absolute through materialising the ephemerality of time and motion.

Attracted to Light narrates the erratic behavior of a moth upon the stimulus of light. The trajectory is captured through cinematic technology and the echo of the path, materialized through rapid prototyping, forms a delicately poetic hanging sculpture.

Featured within the Design and the Elastic Mind exhibition, MoMA New York.

Flight depicts a solid trace echo of a bird taking-off. The subject’s suspended presence encapsulates a frozen moment in time. The forms have been materialised through a journey of stop fame cinematography, CAD, Rapid Prototyping and have been kiln cast at the Lhotsky Glass studios in the Czech Rep. The surface finish juxtaposes a satin surface finish against a reflective surface defining the end profiles, creating a conception and fruition to the piece.

Cross-fire from Studio Mrmann on Vimeo.

The focus of Cross-fire was to examine the intangible characteristic of the spoken word and investigate the unseen affect of sound upon its inhabited environment.

The project centralizes around the context of a domestic argument. In this case the event samples an audio excerpt from the 1999 Sam Mendes Film ‘American Beauty’. The slow building dialogue between the three central characters family dinner climaxes with a sound clash of emotions. The cross-fire of the argument traverses the dinning table but where previously the inanimate everyday objects such as plates, cutlery, teapot etc were unable to express their character, the intensity of the conversation deforms their once static existence into objects of unseen familiarity.

The presented sound artifacts each encapsulate a momentary emotion of the argument.