Fluxus is the result of the cooperation between designer Karim Rashid who designed the Knit – individual hand-made glass element – and Artist Michela Vianello, whose inspiration gave concrete shape to the overall concept of the sculpture.

The wavering Murano glass structure was created to adorn White Gallery, the first big lifestyle store to be opened in Rome in October 2009.

The use of a single design element in an artistic context led up to a suspended and apparently fluid surface consisting of a multitude of elements whose balance derives from the overall composing motion: a fabric of energy flowing through points and lines, creating marked paths and colours able to generate the expression of motion in space.

The sole Knit element covers a recurrence of overtones: white to black passing through 3 nuances of grey to transmit constant visual vibrations. The colour moves
continuously in the optical space between the sculpture and the observer capturing an ever-changing three-dimensional effect in its endless harmonization.

Technical characteristics of Fluxus are outstanding: it covers a surface area of 60 m2, using 80,000 handmade glass Knit elements in 5 colors. 6000 kg of glass, steel and technology. The structure consists of mirrored hand shaped metal tracks, creating a perpetual sense of an unfinished spiral movement. Running on these tracks are fine cross-beams to which the Knit elements are anchored, attached one by one by means of a technical device created to an original Andromeda design. The lighting is provided by 5000 punctiform halogen lamps distributed in a network across the internal surface of the wave.

Two years of research, seven months of development process were necessary to define a new environment where art, design and the highest manual skills dialogue. The result is a swinging – illusory – sculpture. 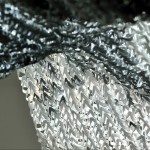 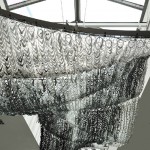 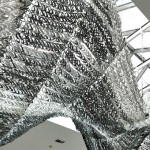