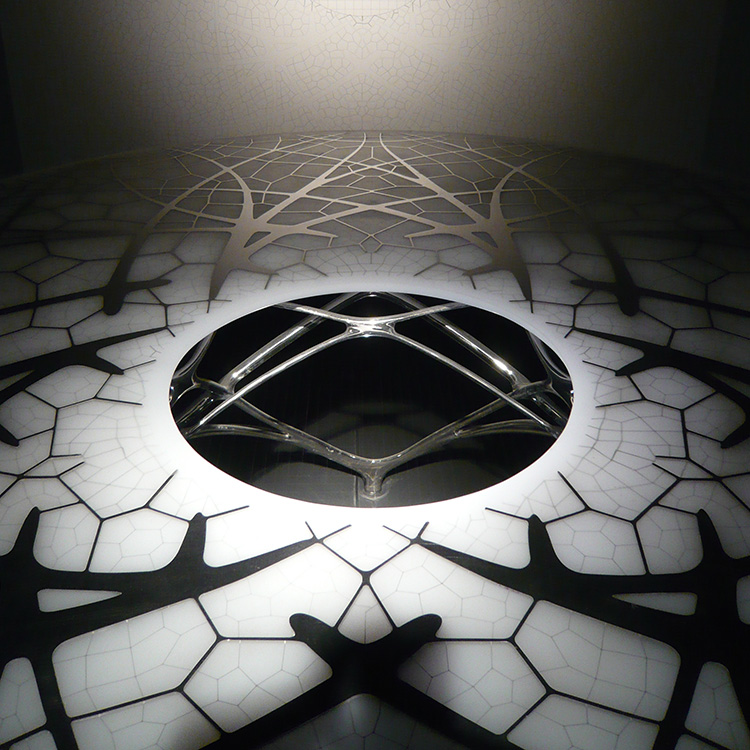 On march 4, 2010 Dutch designer Joris Laarman unveiled his new work at Friedman Benda in New York. It’s his first solo exhibition in U.S. Laarman’s unique aesthetic merges cutting-edge technology and the life-sciences to create work of unexpected beauty. In 2008, Laarman’s Bone Chair and Bone Chaise, his first two works since graduating from Eindhoven, were displayed in MoMA’s exhibition Design and the Elastic Mind. This marked a major milestone in his career and the chair subsequently, was added to the museum’s permanent collection.

In 2006, Laarman’s Bone Chair revolutionized the design process by using an algorithm to translate the complexity, proportion and functionality of bone and tree growth into a chair form. The algorithm, originally used by the German car industry, enabled him to reduce and strengthen his designs by optimizing material allocation, weight and stability, while minimizing material input. In his own words, he sculpted “using mother nature’s underlying codes.”

The upcoming exhibition is the culmination of five years of trial and error, exploratory material research and his continuous quest to translate science into functional objects of beauty now, on a monumental scale. It is a world of new options on the edge of fiction and reality, between efficiency and the sometimes non-efficient joy of experimenting. It gives a peak into Joris Laarman Lab’s future laboratory/ production place which they want to develop. Some of the works are stepping-stones, others further developed bodies of work. All of them are collaborations with engineers, scientists and craftsmen.

“We see the projects as research groups, which we want to develop further into worlds of objects, installations and where possible industrial products in different form languages.”

If evolution could create a chair…

The optimization video shows the concept that started in 2004 in colaboration with droog and friedman benda. For the first time the completed body of work is presented all together. 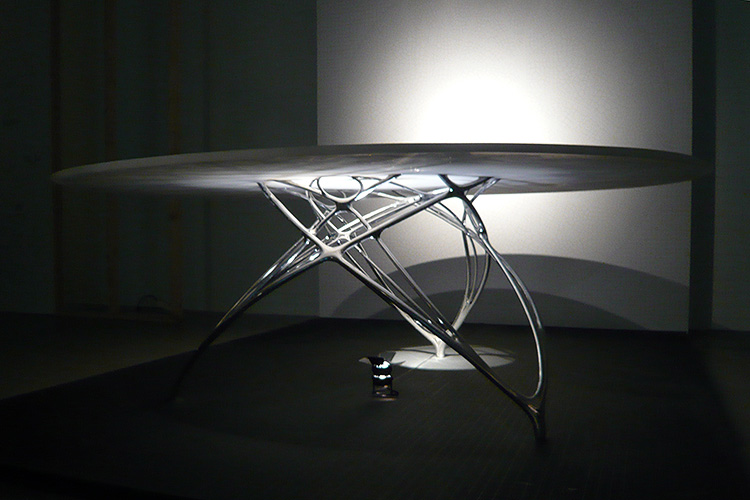 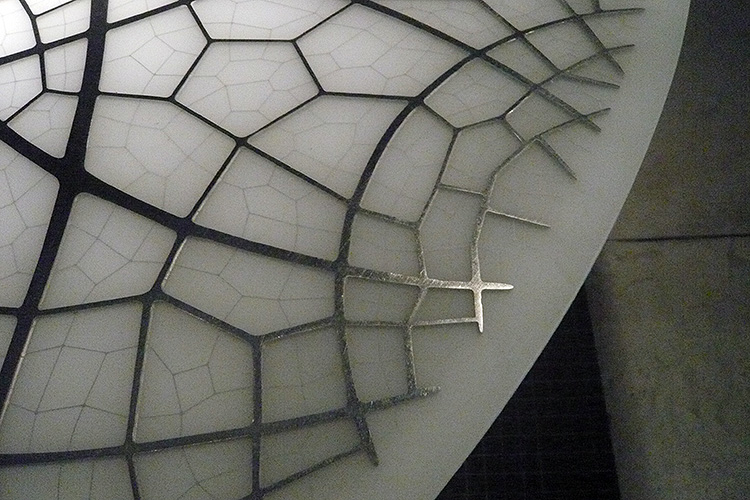 Joris Laarman’s Leaf Table takes after his previous designs, which meld organic forms and intricate, modern designs. His pieces don’t attempt to imitate organic forms, but obviously take their inspiration from them. The Leaf Table has a large tabletop with abstract leaf designs imposed on it. The legs of the table appear delicate while adding overall strength to the design. 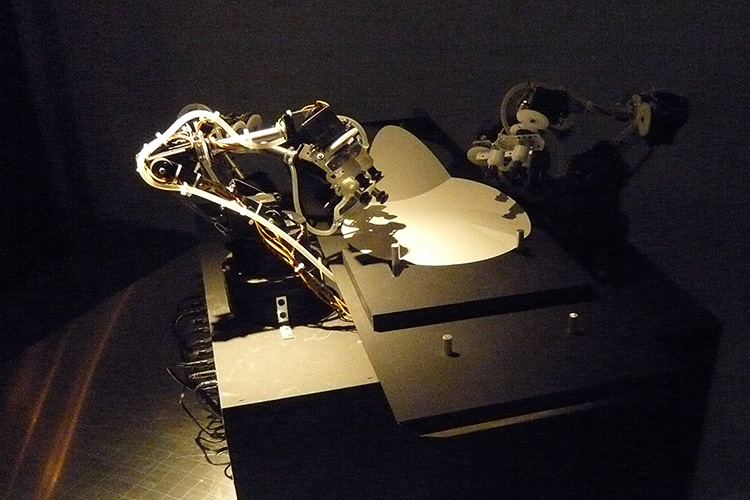 Computational curved crease origami folded by robots in steel. With developments in origami mathematics, complex instructional diagrams, and technology, designs have taken on ever more sophisticated forms. One key has been the evolution of written instructions that compress hundreds of creases into a single diagram. Recently software has been developed with which curved crease origami can be folded in strong materials like aluminum or stainless steel using multiple robots. This technology allows to create complex but elegantly shaped objects strong enough to be manufacture furniture in a matter of seconds. 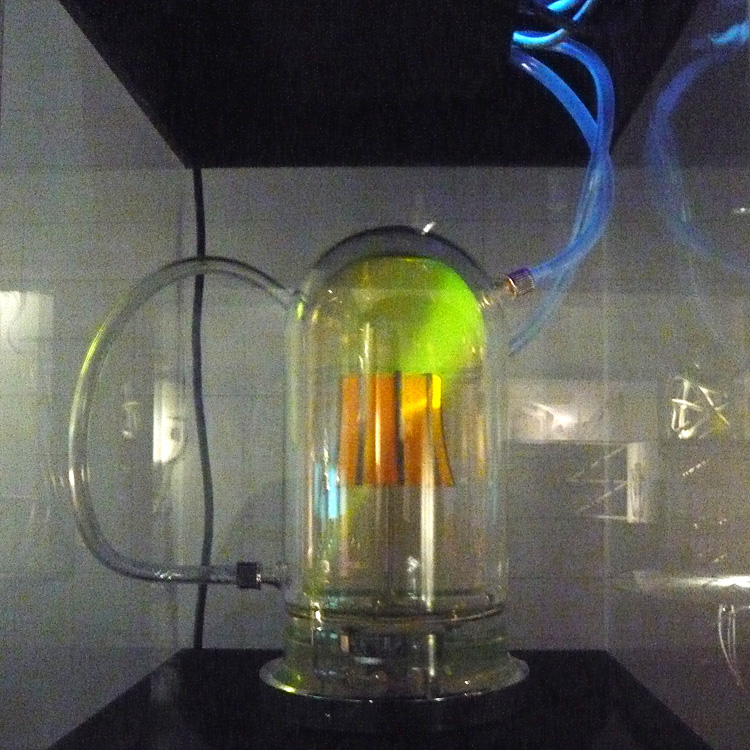 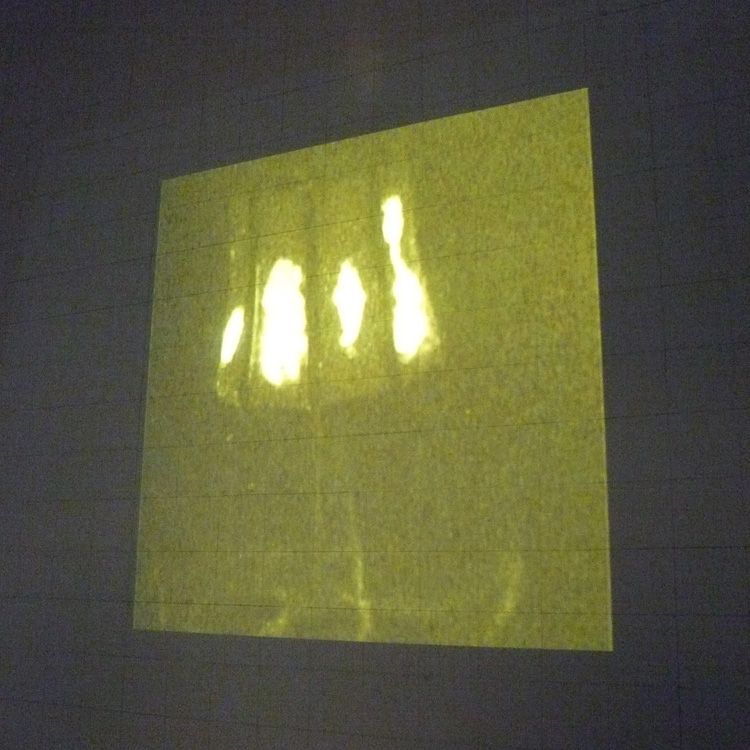 And there was light…

Inspired by recent groundbreaking work on the edge of arts and genomics the motivation behind this project is to set up a larger lab in collaboration with university of Twente and Leiden in The Netherlands to study in vitro manufacturable products. This could lead to a whole new world of objects, products and production methods with new formal languages that are unknown until now. Using the beauty and efficiency of biological growth this could revolutionize the way we manufacture objects and might be a solution to the drain of natural resources.

This lamp is half made of living organism and half made of non living material and recently died*. It was born on February 23 in a Dutch tissue culture laboratory. On the video Half life radiated brightly when it was in healthy conditions. The cells responsible for the emission of light in the hood of the lamp originally stem from a Chinese hamster. In 1957 these CHO cells were isolated from a hamster’s ovary and kept alive as a cell culture for research purposes. In the 1990s this cell line was enriched with the fire fly’s luciferase gene. Ever since than these hamster cells glow in the dark in presence of luciferine. According to present state of knowledge in the life science the development of bioluminescence systems in living organisms occurred naturally about 20 or 30 times in evolution. Well known examples of bioluminescence are found in bacteria, fire flies, and jelly fish. 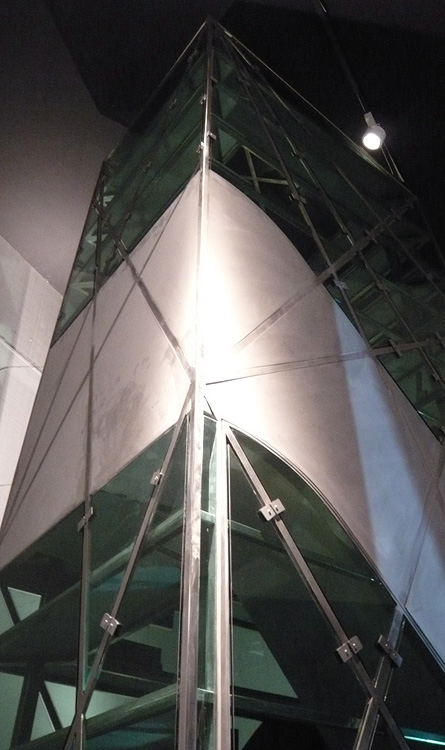 IN CASE OF A THOUSAND BOOKS:

Originally designed as a special commission this is an example of creating objects of an uncommon scale combining the craftsmanship of an architectural model maker and structural engineers. It is a 5.6 meter high bookstaircase in glass stainless steel and poly concrete partly made in the architectural model making workshop of Vincent de Rijk. The bookcase could contain as many books as an early E-reader which visualizes the disappearance of shape, volume and material in the digital world and somehow makes it a monument for ones treasured books and their smell, material, form and feel in general. 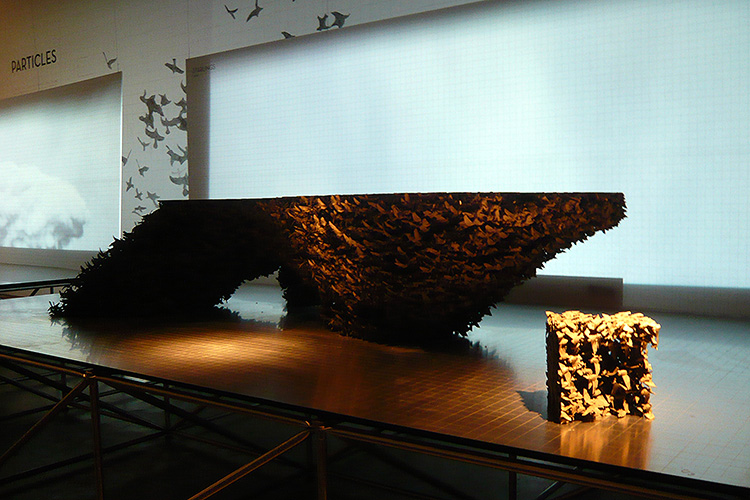 Inspired by the beauty of Dutch skies with its famous dramatic cloud formations, and ballets of starlings and light this project is focussing on creating self supporting sculptural objects based on particle behavior.

Using 3D animation software of the film industry particle behavior can be simulated and stopped at any given moment in time after which it is generated into a self supporting structure of unpredictable shape and porosity. 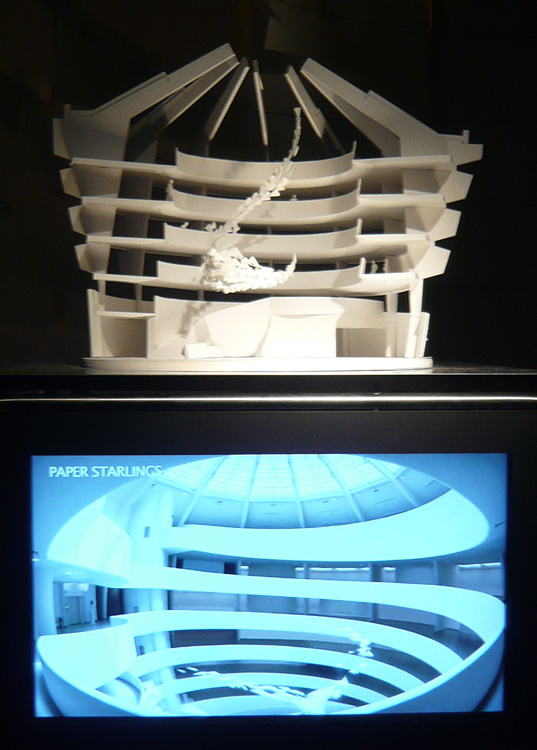 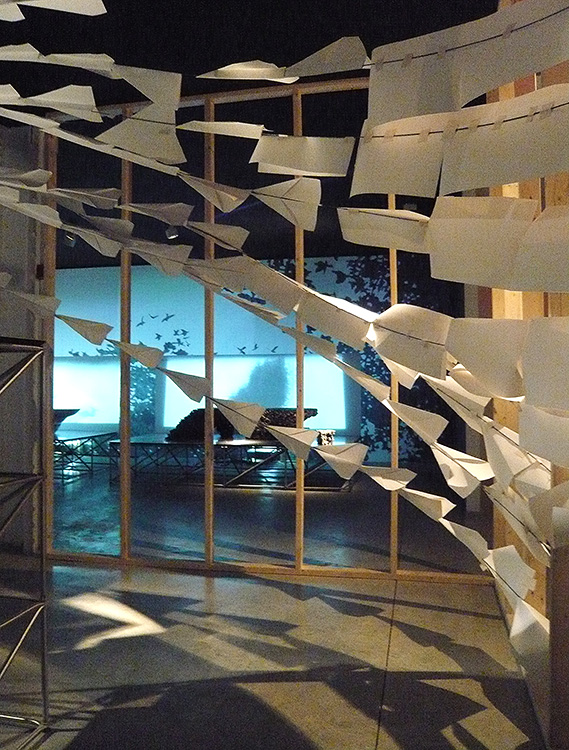 Originally proposed to the Guggneheim for the Contemplating the Void exhibition, starlings is an interactive installation containing 2000 architypical paper planes autonomously flying in a gracious organic ballet remotely guided by a high tech indoor gps system. These planes can either fly as an interactive swarm that reacts on inteference with the public or be guided in a pre- determined choreography. The planes are motorized as micro robotics with radio transmitters and carry a tiny battery. When a battery is empty the plane lands on a large ground platform and is charged automatically. When the battery is re-charged the plane lifts off to join the rest of the swarm again.

Imagine controlling your own swarm of paper planes…

This collaboration was made possible by a company called United states of entertainment and asctec in Germany. This project has been proposed to the Guggneheim for the Contemplating the Void exhibition.