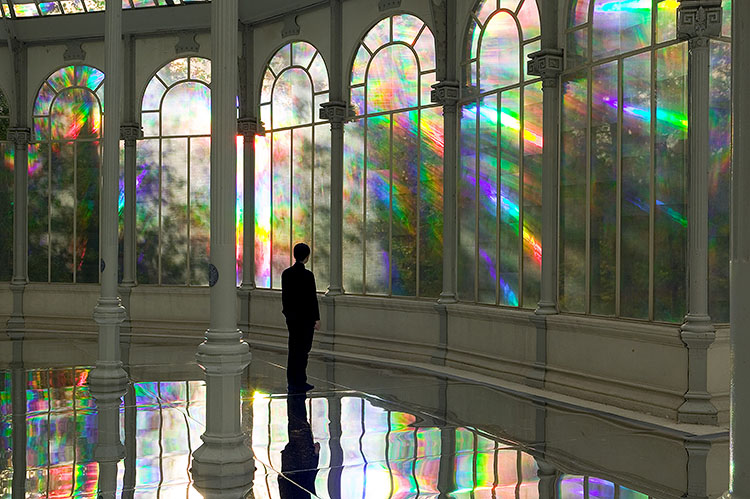 Kimsooja (Taegu. Korea, 1957) has dedicated her long, intense artistic career to developing her own personal vision of the world through the use of installations, performances, photography, videos and site-specific projects. Her obvious singularity has tempted some to seek out links with certain Eastern philosophical and artistic traditions, but her core material is reality itself. Her upbringing and life experience have helped shape her thinking into a unique blend where Christianity and Western philosophy is intimately entwined with Zen Buddhism, Confucianism, Shamanism and Tao. 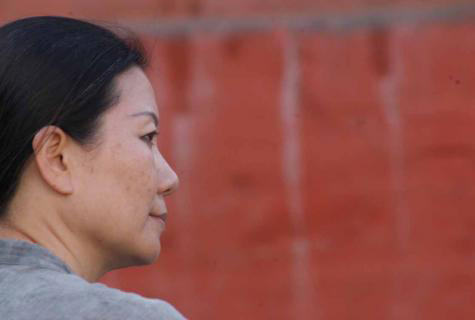 In the history of Western art, we can find several referents to her work in performance and body-art circles, where artists such as Marina Abramovic and Ulay or Valie Export parallel her concerns. But rather than allowing herself to be swayed by theoretical issues and philosophies, whether Eastern or Western, Kimsooja has followed a trajectory marked mainly by a social and political commitment ensuing from her own life story, memory and sensitivity. Her work has deep universal roots and aspires to capture the totality of human experience: her creations appeal equally to mind, body and soul. 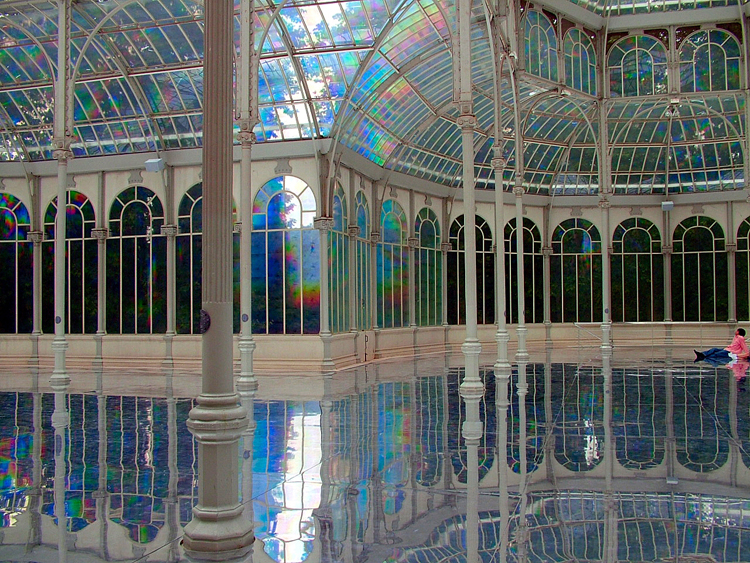 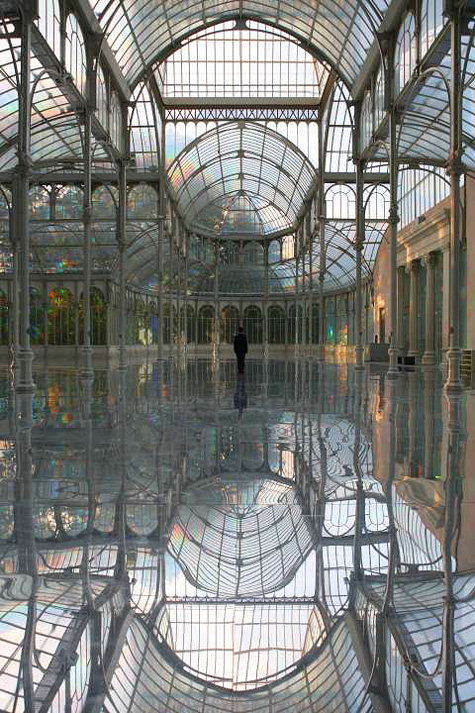 For the Palace de Cristal in Madrid, Kimsooja has made To Breathe – A Mirror Woman, comprising an intervention in space and her earlier sound piece, The Weaving Factory, 2004. The project is a logical continuation of her previous works. The artist has exploited the structure of the building, leaving it intact so that it forms a whole with the installation of a mirror on the floor. This acts as a multiplier and a unifier of the original architectural space. Here, Kimsooja submerges us in a transfiguring experience that uses minimal elements: a translucent diffraction grating film covering the glazed dome and wall of the crystal palace, a mirror covering its floor and the sound of her own breathing. We are invited into an experiment with our minds and our senses, to give free rein to our sensorial perception and our imagination. 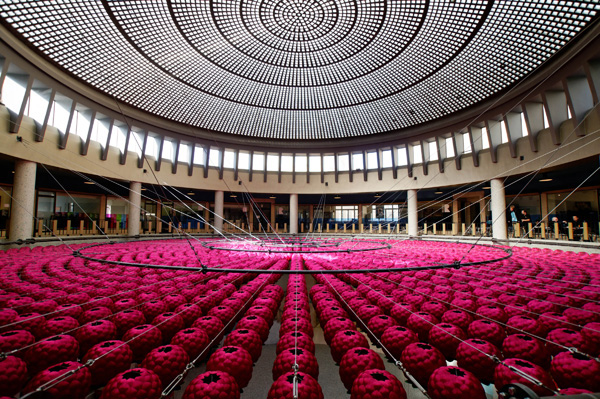 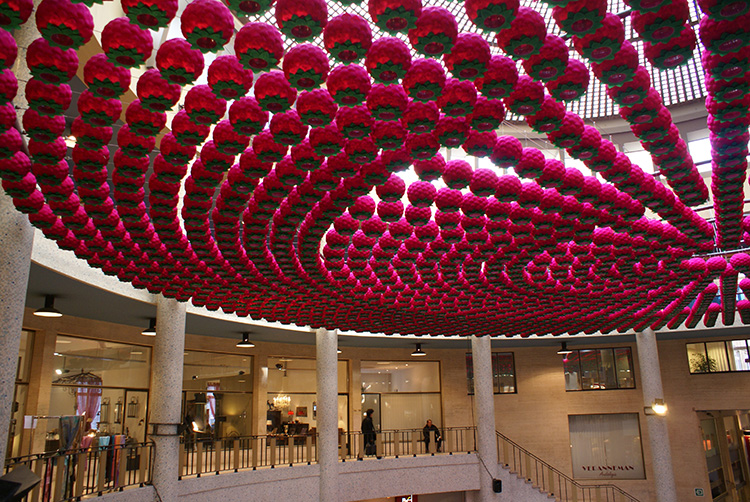 Lotus Zone of Zero 2008, Installation in the Rotunda at Galerie Ravenstein, Brussels, 2008  Photos by Mikael Falke and Fabrice Kada, Courtesy of the Kimsooja Studio 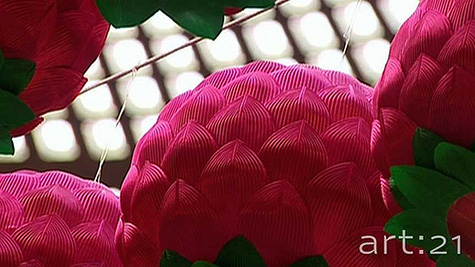 The “Lotus Zone of Zero” was created for Galerie Ravenstein in Brussels. It consists of a steel structure and cables and 2000 lotus shaped lanterns suspended in a circular pattern. The installation is accompanied by sounds of Gregorian, Tibetan and Islamic chants. Utilizing space and time, installation is a call for peace, love and understanding amongst human beings. 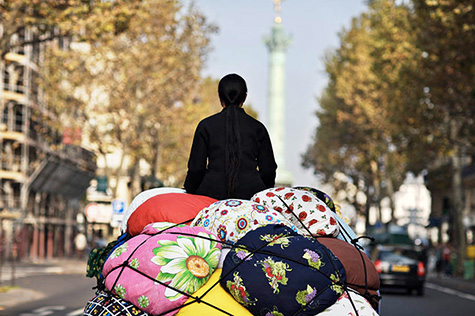 From the beginning of the Nineties, after having worked with abstract collage compositions combining sewn objects with drawing and painting, Kimsooja began to create installations and spatial objects that she dubbed Deductive Objects, where sewing was both a metaphor and an activity in itself. Needles, cloths, threads, quilts and such like formed part of her creative universe. Sewing, wrapping, stretching, folding, unfolding, covering are activities to which she repeatedly returns. The materials she chooses and the way she employs them derive from the traditional use of cloths in Korea. The bottari are bundles stuffed with cloths, clothes, etc, wrapped up in well-worn traditional Korean bedcovers. As the artist explained, second-hand bed clothes “bring” with them smell, memories, desires, holding the spirit and life of former owners. From then on, these commonplace objects in Korean culture became a constant in her work. In Korea they are associated with mobility (voluntary or obligatory), as they are used to carry around unbreakable domestic chattels such as clothes, books, food and gifts.

Apart from the bottari, another characteristic element in her work is the employment of brightly colored, well-used traditional Korean bedclothes. For Kimsooja, they symbolize women, sex, love, the body, rest, sleep, privacy, fertility, longevity and health. Elements brimming with significance and present in human life from cradle to grave.

As of the mid-Nineties, Kimsooja began to use video fundamentally as a way to document and record performances in which she herself played a leading role. Between 1997 and 2001 she filmed a series of videos from performances she held in various towns and places the world over. Both the process and the pictures that these generated link into her attempt to reconcile the tensions inherent in the relationship between our ego and others’. The first video she entitled Cities on the Move -2727 Kilometers Bottari Truck. It was made in November 1997, on an eleven-day journey through Korea on a truck loaded with colorful bottari. The 7:03 minutes of footage record the trip in space and time. A metaphor for her own life -constantly crossing frontiers- but also for one of the characteristics of contemporary artists and our society as a whole: nomadism is one of the mainstays of Kimsooja’s art. We find it in many works of hers: in the installations with the bottari as symbolic elements and in other video pieces.

The common denominator to this series of videos is the female form, a motionless woman with her back to the camera. It is presented in a myriad of settings: standing amongst passers-by in Tokyo, Shanghai, New Delhi, New York, Mexico, Cairo, Lagos and London or reclining on a rock in Kitakyushu, Japan -A Needle Woman (1999-2001); sitting on the pavement asking for alms in Cairo, Mexico and Lagos -A Beggar Woman (2000-2001); lying in the streets of New Delhi and Cairo -A Homeless Woman (2001); or standing next to a river in New Delhi – A Laundry Woman (2000). But wherever she may be, the figure of the artist is always inaccessible, her face hidden from the viewer. The woman who will not let us see her face, who obliges us to ask uncomfortable questions of ourselves, becomes an abstraction. In these works, immobility envelops everything. She manages to be herself and the “other” at one and the same time: both presence and absence. 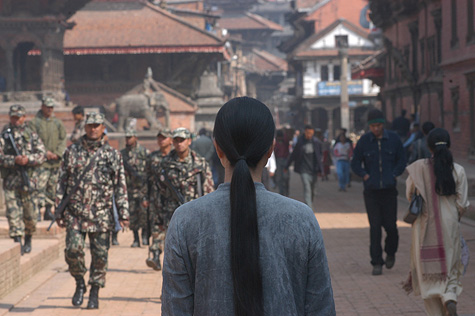 In the Needle Woman video, the artist is standing stock still in the middle of streets overflowing with people. The camera films the mass of passers-by treading the streets of these cities. It shows the faces of this anonymous throng while hiding that of the artist. Thousands of people walk towards her, enter the camera’s field of vision and then disappear. Like a sociologist, the camera records the reactions of this multitude in a confrontation with the “other”. 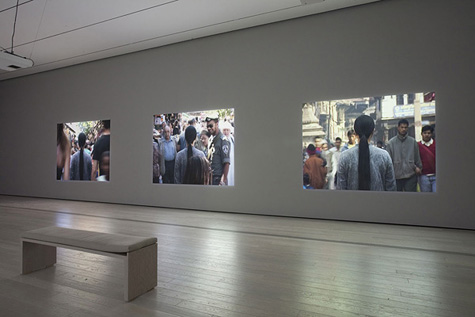 For the 51st Venice Biennial in 2005, Kimsooja made a new version of A Needle Woman for which she visited a further six cities: Patan (Nepal), Havana, Rio de Janeiro, N’Djamena (Chad), Sana’a (Yemen) and Jerusalem. In six contiguous screens, presented as a video-installation in the midst of absolute silence, we can only intuit the teeming sounds of the passers-by and the noise of traffic in the distance.

In all these videos, Kimsooja makes her presence felt in this world through the continuity of reiterated situations and shots of her own unaltering image. People’s physical, material being intrudes into her work in the same way as Nature. They are all a manifestation of different ways of being in this world, a statement of our alone-ness, but also a reminder that the world is ever present and that we are surrounded by others. Her work goes far beyond the gender issues, an area where she can be too simplistically pigeon-holed. She is demonstrating the manifest importance of being human in the chaotic world we inhabit, with all its solitude and its ephemerality. Directly or indirectly, through the traces that it leaves behind, people’s “footprint”, humankind is always present in her work. 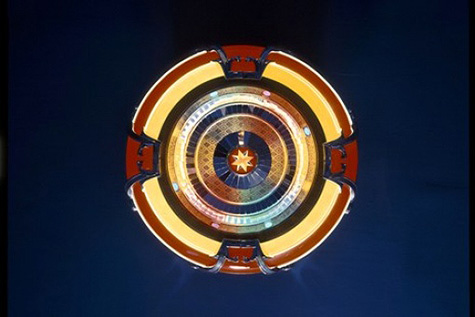 Four sound-channels broadcast Tibetan, Islamic and Gregorian chants, which inundated one of the rooms at The Project in New York, for which Kimsooja conceived Mandala: Zone of Zero, in 2003. Creating a space for isolation, meditation and daydreams, she placed a brightly colored juke-box speakers on each of the four walls of the room, exploiting their formal similarity to traditional Buddhist mandalas to imbue an object of Western pop culture with Eastern religious connotations. Reflecting their assimilation of different cultures, social contexts and aesthetics, this installation explores the notion of unity and totality according to which mind and body are spiritually united.

Kimsooja is inviting us to take an inward-bound trip: to the inside of the space, the inside of the rainbow, the inside of the mirror, the inside of our breathing. The final destination is inside ourselves. And on this inward trip we come face to face with the other, that other so ever-present in her work. The mirror connects the ego and the alter-ego and reflects the otherness that we always carry within. The mirror attracts and reflects. Reflecting is another way of exteriorizing the ego. Kimsooja is talking to us about the relationship between our body and space. She makes art into an experience of body and mind, of our sensory perception and of our imagination.

Excerpts from “Kimsooja: Less is More” Oliva María Rubio, 2006. This text was published in Kimsooja To Breathe-A Mirror Woman, 2006.