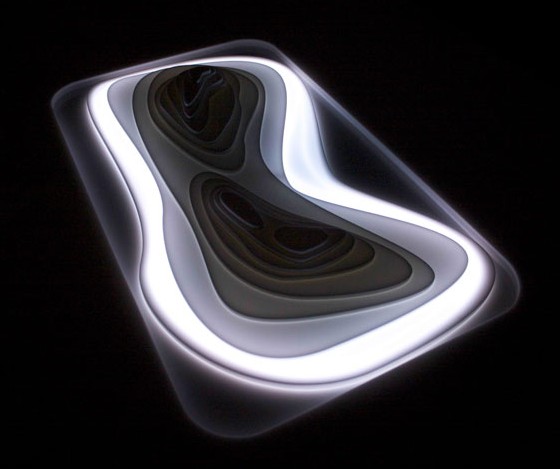 Artist/designer Marcus Tremonto received international recognition and acclaim for his innovative limited edition “Lightworks” pieces which were exhibited in New York at Philips De Pury and Company in 2007. Following his one man show he was chosen for the coveted Swarovski Crystal Palace in Milan 2008.

Marcus exhibits internationally and his works can be found in private collections, museums and retail installations. He has a masters in Fine Art/Painting and a BS in Mathematics and Physics and has been an important influence on the Design-Art movement working as a consultant and curating important exhibitions.

He founded his New York based design studio, Treluce Studios, with wife and partner, Monica Tremonto in 2002; the studio is a collaborative which focuses on product driven concepts based on re-contextualizing, re-purposing and re-imaging traditional designs with new design philosophies. Works range from jewelry and objects to furniture and lighting.

The 2009 show for Spazio Rossana Orlandi further explores the thread of architectural referenced imagery and adaptable works. The exhibit included two Paper Landscapes lights, a project that Treluce studio has been working on for two years in various formats. It’s an adaptable lighting system that is inspired by a technology that was used to generate topographic digital landscapes.

Another project, “Plug-In Table” is a system based table that explores the concept of being able to use wall pieces as center pieces instead of the traditional flowers and vase – all four of the inserts to the table can be hung as wall pieces or inserted into the top of the table.